This week has been one we’ve been anticipating for months- summer break has arrived! No more 6:30am wake up times and rushing to get my son ready for school. No more school drop-offs, pick-ups, packing school lunches(that don’t get eaten) and no more homework!! It has been a great first week of Summer break- and you can bet that we’ll be trying to squeeze in ALL the fun we can over the next two months. Because before you know it school will be back in session…

Summer break started off with a fun little “Mom’s Night Out”! One of the ladies decided that after all the graduation craziness, we deserved a girls night. So she planned a little outing for us. We were strangers a year ago, then we all got to know one another through pick-up’s, drop-offs, class parties, etc. We bonded over the whole Kindergarten experience and realized we had a lot in common. We ended up becoming pretty good friends- we have an endless group text going that would confuse the normal person! These ladies are just FUN. So of course our Mom’s Night Out was a blast! We had dinner and drinks, then went to a dueling piano bar where we sang our faces off and ruled the dance floor. It was a fun night! I feel so lucky to have met these ladies this year!

They’re a fun group! We had to take a “dab” picture for fun- since we spent the year yelling at our kids for doing it in EVERY picture! Lol.

The next day my husband and I surprised Cooper with a trip to The Great Wolf Lodge! He was so excited once he figured out where we going. We have been a couple times before- and he had been asking to go back for a long time, so we knew he would be stoked. We checked in early, got our wristbands, met up with some friends, and hit the water park. He had a blast in there- he especially loves the wave pool. He swam a bunch, we did the lazy river and some water slides, and had a blast. After showers and dinner, we hit the arcade and stayed up really late playing ALL the games. He had an awesome day! The next morning we had breakfast and then did the 4-D video game/ride experience… twice! Of course we had to spend a while in the arcade(again- I think my husband is more obsessed with the arcade than Cooper!) before checking out. It was the perfect little surprise getaway. The Great Wolf Lodge is so fun!! Cooper’s already asking when we’re going back. If you have kids that love the water I highly recommend a trip here. Join their mailing list so you can see when they’re running deals, or check Groupon too.

Later in the week we drove out to Newport Beach for our friends Gender Reveal party! I was excited- I’ve seen plenty of gender reveal videos online but I’ve never been to one in person. They asked the guests to dress according to the gender they were guessing, so I wore blue. Cody and Cooper were guessing girl, but they weren’t into the idea of wearing pink. 😂🤣 The gender was revealed via a pinata. It was filled with either pink or blue candy- they just had to pull the strings to find out! The video of the reveal is super cute:

They’re having a girl!!!!! I was wrong of course- I have a pretty good record of ALWAYS being wrong when guessing what my friends are having. When I was pregnant I was POSITIVE I was having a girl- obviously I was wrong that time too. Lol. We are so happy and excited to meet their baby girl!

We ended our week with a fun mother/son trip to Knott’s Berry Farm. It’s always so much fun there! The park wasn’t very crowded- which is always nice. We rode a bunch of rides, watched the Western Stunt show, ate some good junk food, played some games, and had a blast.  We left way too late and we were exhausted the next day- but it was worth it! 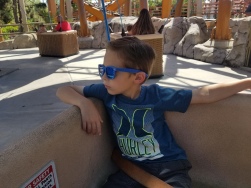 I hope all of you had a great week too! For those of you on Summer break I hope your enjoying your break so far. Thanks for stopping by-

One thought on “Summer Break is HERE!!”

Hi! I’m Yley(pronounced E-lay). I’m a wife and a Mom. I love to travel, cook, and be outdoors doing all the things! After a lifetime in California, I took a leap of faith and made a big move- now I’m figuring out life in Oklahoma! Thanks for visiting my blog! Follow along with me on Instagram too! My user name is @Yley